The very first gluten-free, vegan baking cookbook I ever bought was Erin McKenna’s Babycakes: Vegan, (Mostly) Gluten-Free and (Mostly) Sugar-Free Recipes from New York’s Most Talked-About Bakery. With a cover like this, can you blame me? 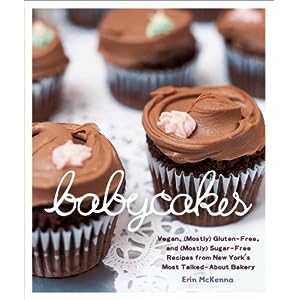 I went home excited to bake for my food-allergic son. But a quick look at the reviews on Amazon.com made my heart sank. Did I make a huge mistake by getting seduced by the glossy pictures in this pretty cookbook? Well, there was only one way to find out.

Below are the recipes I’ve tried so far and the results I got:

I made these into bread and mini-muffins:

The mini-muffins (above) were excellent. Sweet, moist, yummy and tasty. The bread, however, was a flop: 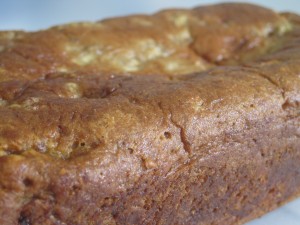 See how it sank in the middle? It’s actually uncooked inside! This exact same thing has happened to me before, with a regular banana bread recipe, so I don’t think it’s the Babycakes recipe’s fault. I attribute it to the:

I have since bought an aluminum loaf pan and an instant-read thermometer so I have better chances of having banana bread turn out. Also remember to only half-fill your loaf pan with the batter. For most gluten-free, vegan baking, smaller baking pans give better results.

I admit, I made this for myself, not DS. I made so many mistakes making this that I was ready for a big, fat failure. However, despite my mistakes, it turned out well. However, because you have to roast apples for this recipe and it’s more complicated than others, I’m not likely to make this again. 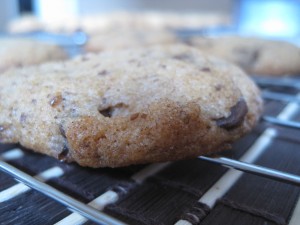 These were so good, I had no problems getting DS and his non-food allergic sisters to eat them. Yum!

I baked these in a dark mini-muffin pan, before I knew the proper way to use dark pans. Yet I got good and yummy results. I had to tell the girls to lay off and leave enough for their brother.

Another success! I didn’t know what garbanzo-fava bean flour was, so I used plain chickpea flour. None of us noticed or minded the bean taste, and I’m happy that we’re all getting healthy protein while eating our sweets.

By now I’m wondering what all the negative reviews were all about. And then I moved on to the…

These turned out awful: 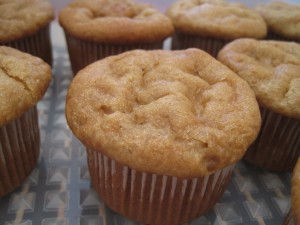 The texture was gummy and the taste was not good. The gluten-free, vegan vanilla cupcakes from Vegan Cupcakes Take Over the World had a much better texture and taste (more on that in a future post).

For the vanilla frosting, I followed the recipe posted on the Martha Stewart website (from when the author was featured on the show). The online recipe is different from the one in the book and, after reading all the complaints on Amazon, I figure the one on the site must be the right one.

While I did get the consistency right, the taste was plain off. It was not sweet enough for frosting. I tried adding some agave nectar but then it was a sickly sweet. Too bad! I spent a fortune on coconut oil, only to throw away all the frosting 🙁

Despite all the hate that’s been published about this cookbook, it’s a good reference if you want to bake delicious good that are free of gluten and animal products, and doesn’t use the usual substitutes such as Ener-G egg replace or Earth Balance shortening. However, don’t expect to recreate the award-winning Babycakes Bakery cupcakes in your own kitchen. Apparently, that’s a closely-guarded secret and McKenna doesn’t spill the beans in this cookbook. Neither does she give us a satisfactory alternative.

To ensure your success, read the author’s instructions and advice in the beginning of the book. Also look at my tips for successful gluten-free vegan baking.

Have you tried this cookbook? What results did you get from it? Let me know in the comments below.