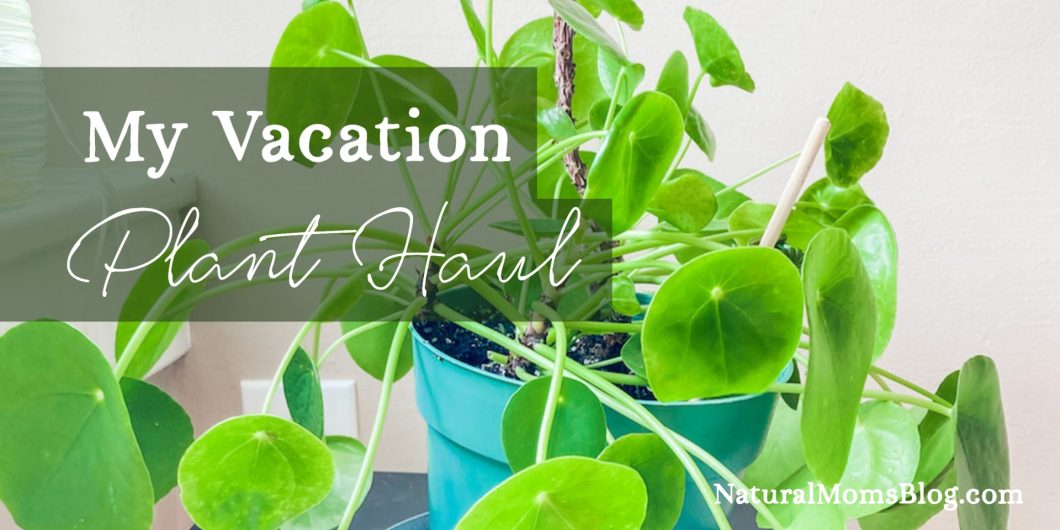 When you go on vacation, you don’t expect to bring home plants—for free!

But that’s exactly what happened.

It pays to stay with a friend who has a green thumb, a productive garden, and a generous heart. 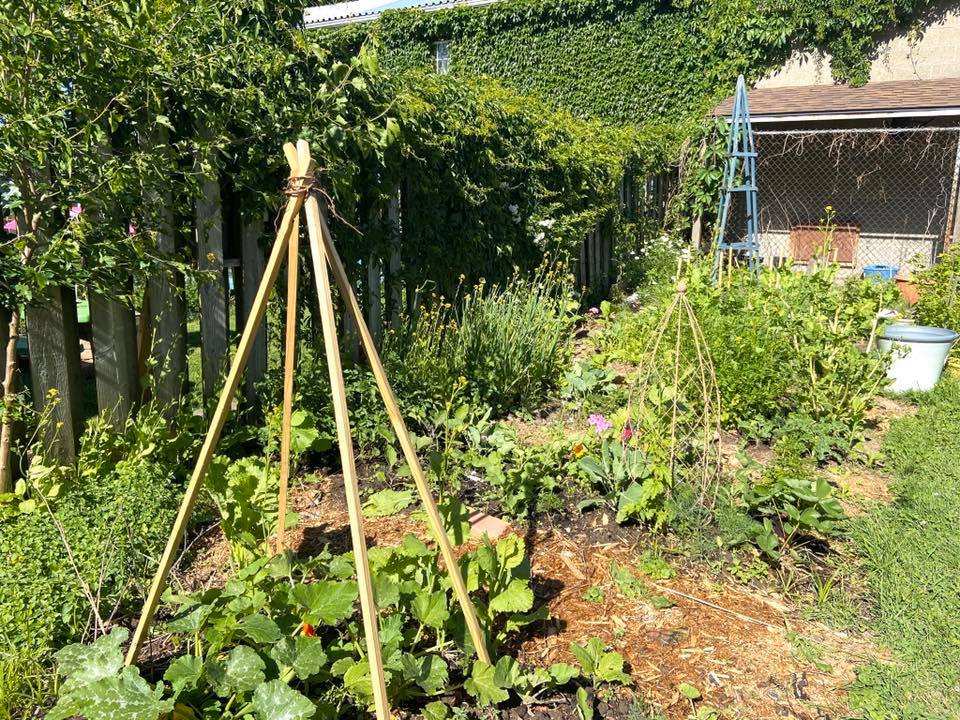 And that’s just what I did.

So here’s what I brought home with me.... 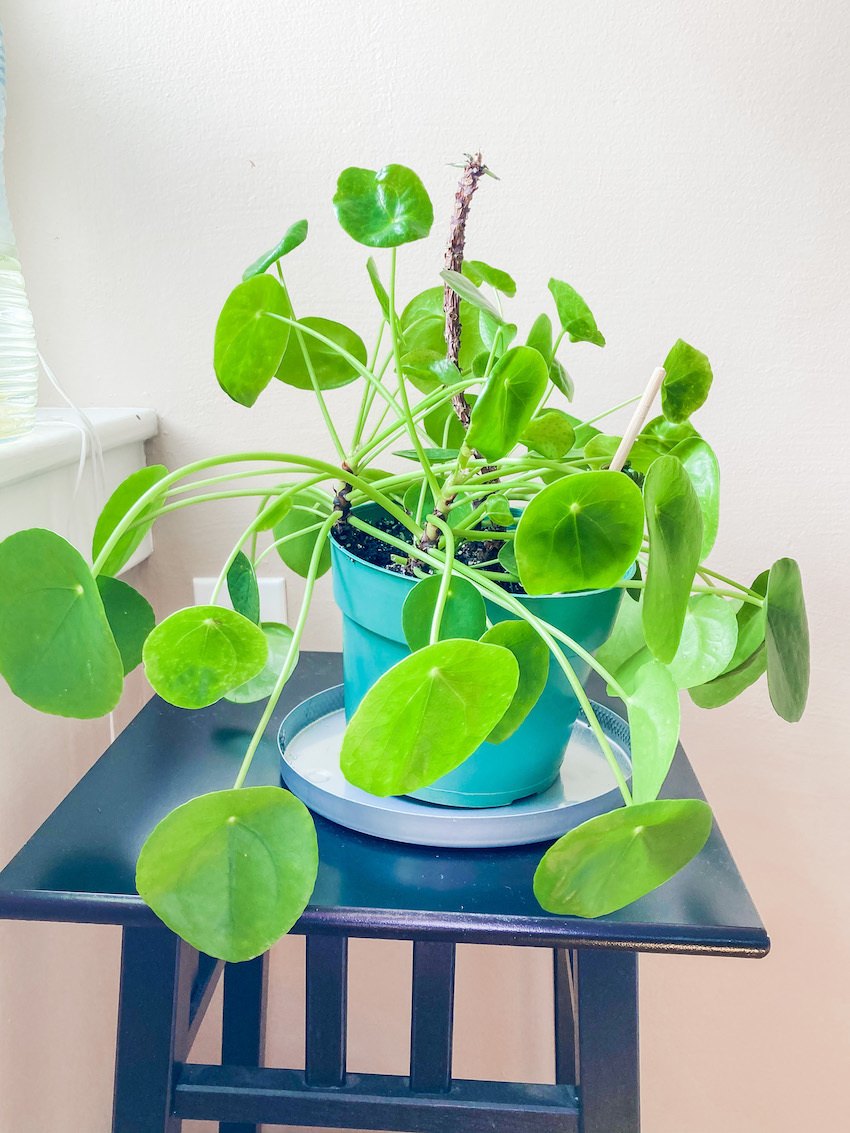 I’ve had my eye on this cute plant since seeing it on several houseplant videos.

Who can resist those cute round leaves?

So I was pleasantly surprised when I walked into my friend Imie’s beautiful home to see several pots of this plant.

When she found out how enamoured I was with the Pilea plant, she offered to give me some cuttings.

But then she changed her mind and gave me this entire pot instead!

It’s actually two plants in one pot, so bonus points 😀

Imie also shared the story behind the Pilea.

Did you know the Pilea is also known as the Friendship Plant?

Legend has it that it was brought to North America by a Swedish nun. She gave out offshoots to others on one condition: that they would continue to share the babies of their plants with their family and friends.

Pilea produces many offshoots, so it’s easy to propagate and give away.

And soon, I'll have my own to share, too!

Note: I love gifting plants. Years later, friends show me pictures of the plants blooming. To be honest, I’ve usually forgotten giving them, but the recipients always remember. 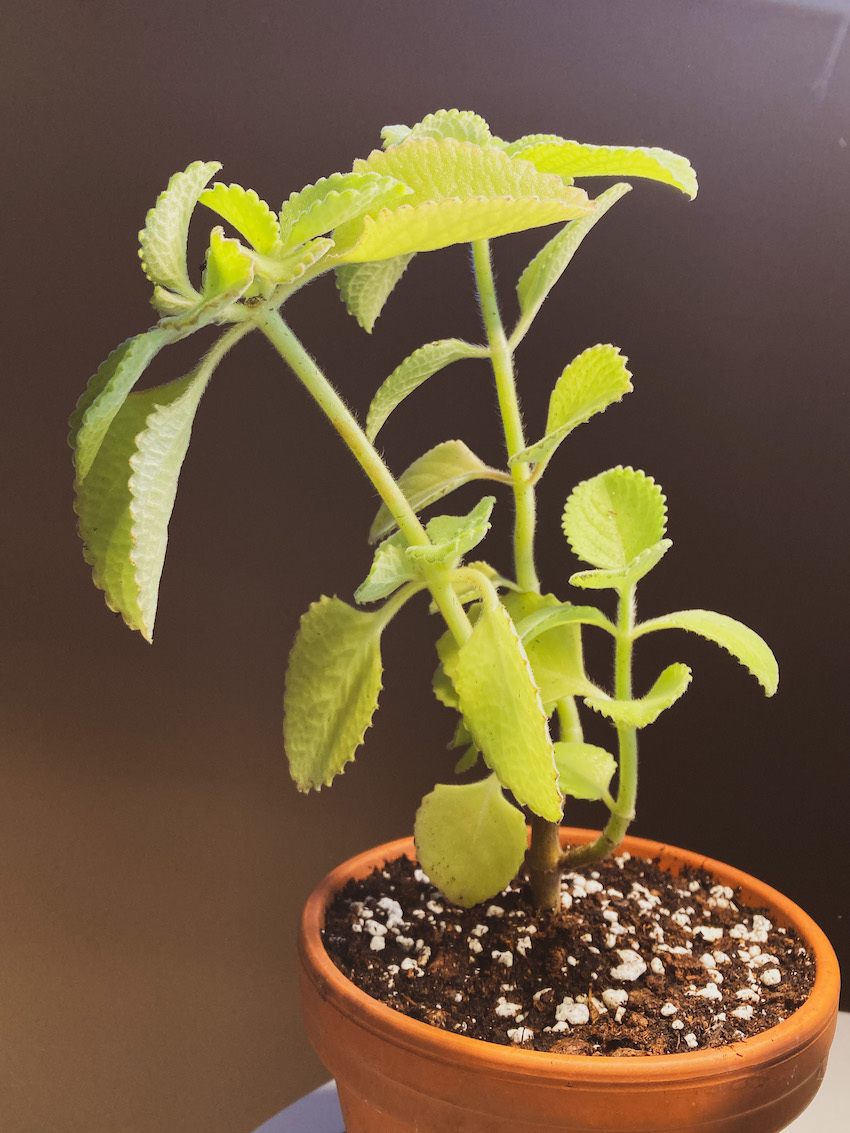 As Imie was giving me a tour of her garden, she pinched off a leaf of the Cuban oregano and let me take a whiff.

It has large, light green leaves that look very much like succulents.

They’re thick and have a slightly velvety surface.

And if you were to break a leaf, you’ll see its plump, moisture-filled flesh. Almost like an aloe vera.

Since bringing it home, I’ve learned that it’s really easy to propagate from cuttings.

One video I saw even said that you could simply plant a leaf into soil and it would root. 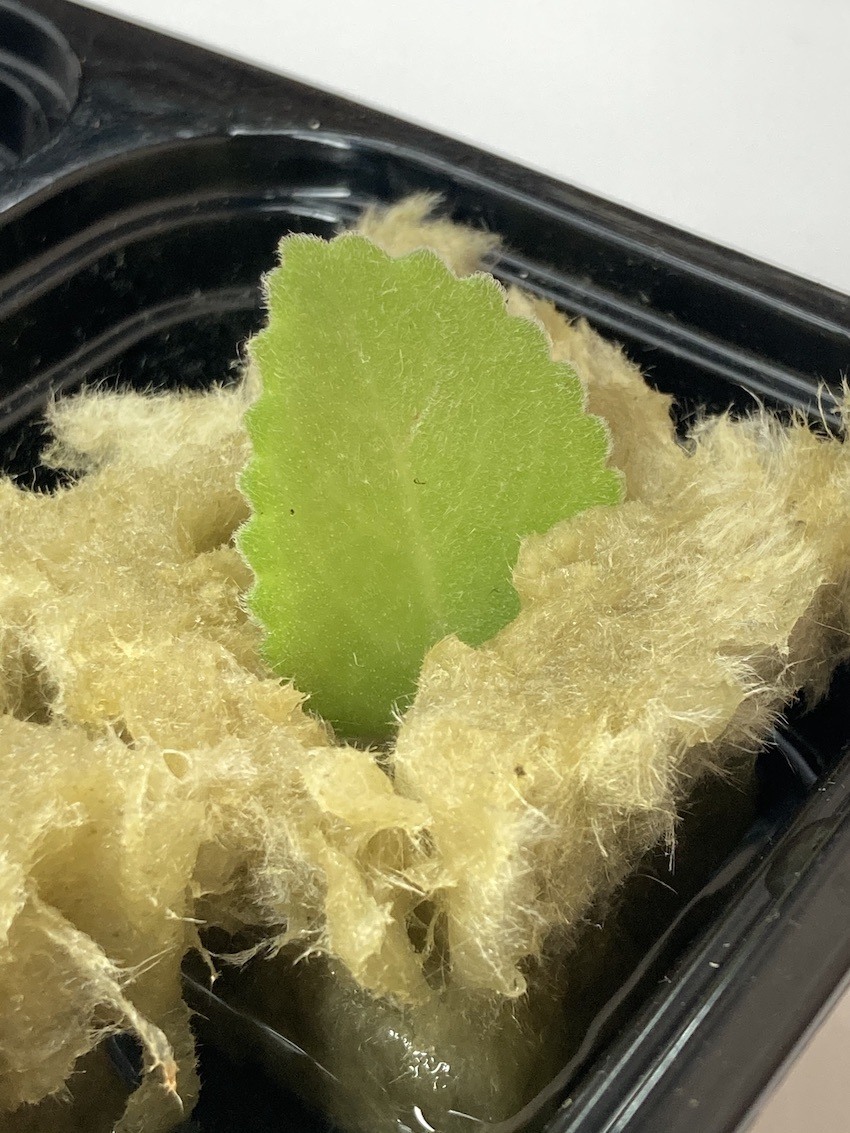 Propagating a Cuban oregano leaf for the Tower Garden

Let’s see how this will turn out. (fingers crossed!) 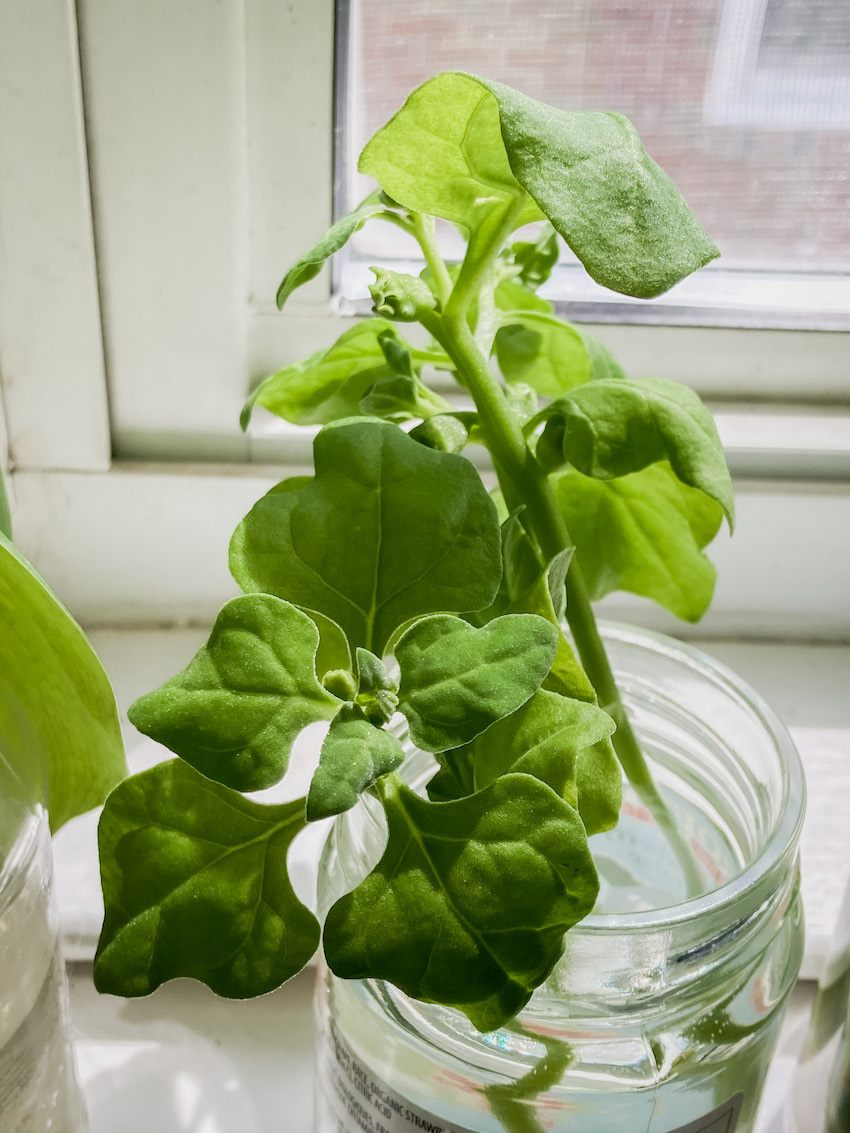 Once these produce roots, I will move them to my indoor Tower Garden.

And finally, I received cuttings of this interesting plant.

It’s not actually a spinach, but it’s just as nutritious and it tastes just like spinach.

But unlike spinach, it’s heat-tolerant.

It’s another micronutrient-rich green, leafy vegetable that grows easily. And if other gardeners are to be believed, bugs tend to avoid the New Zealand spinach.

New Zealand spinach has an interesting history as well. It’s said that Captain Cook discovered it in Australia and took plants with him to prevent scurvy on his ship.

Imie’s letting hers go to seed, but the leaves are still good and not at all bitter.

I’m trying to propagate the cuttings and to harvest seeds for the Tower Garden.

I’m going to try to grow the Cuban oregano and New Zealand spinach both in soil and in the Tower Garden.

But what about my earlier admonition to never bring plants from other gardens into the Tower?

Since I wrote that post, I’ve learned that you can de-bug plants before bringing them indoors.

Here’s the procedure I followed:

The article I saw said to use a mild soap like Bronner’s or a dishwashing soap but without a degreaser. I used Solumel from Melaleuca. I think it’s going to be very effective in killing bugs because it contains a small amount of plant-based alcohol, tea tree oil, and green soap, which instead of being a degreaser actually helps moisturize skin.

Submerge the entire plant in the bucket.

If your plant is too large, spray plant parts that cannot be submerged.

My bucket wasn’t big enough for the Pilea plant and its top leaves were sticking out. And so, I sprayed it with a mixture of water, neem oil, and Solumel.

3. Rinse the plant and let drain.

I gave the plants a thorough rinse to wash away the soap and spray. I then let them drain well.

I love this de-bugging method!

The plants look and smell super fresh and clean.

Now that I’ve discovered how to de-bug plants from outdoors or other sources, there are so many more possibilities for my Tower Garden!

Not only can I feel confident about moving plants from outside to inside the house.

But I now have a strategy to safely plant "outsider" seedlings into my indoor Tower Garden.

Note: This method does not 100% guarantee that it will eliminate all bugs. Continue to keep a close eye on your plants for signs of pests and other problems.

It's always fun to try and grow new things, whether in soil or in the Tower Garden — or both!